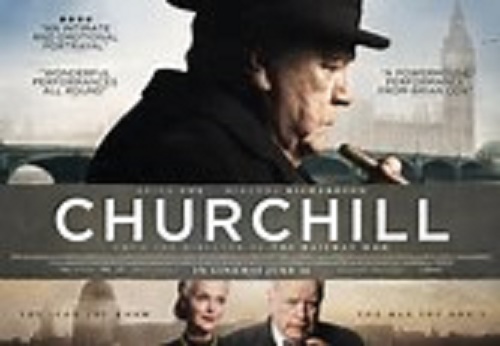 This week, my husband and I went to see a long awaited film. ‘Churchill’ who was First Lord of the Admiralty in the first World War and the Prime Minister in the second World War.  My husband along with many others believes that Winston Churchill was the greatest Britain ever. I am afraid that I have not been so generous in my beliefs.

This film does not do Mr Churchill any favours, in terms of the portrayal of his character and his decision making of D-Day.

Brian Cox did a fine job representing his character and although I was aware of his heavy drinking, smoking and his black dog depression. The film brought home to me a picture of an old, unhealthy leader who was not in touch with the modern warfare of the time. I understood the symbolism of the seas of blood, relating to the disastrous attempt to open a second front at Gallipoli during the First World War. It was clear to see, this had a wounding and deep psychological effect on Churchill as he had backed this campaign, much to his regret.

Danny Webb as General Alan Brooke, John Slattery as Eisenhower and Julian Wadham as Montgomery gave a good performance as supporting cast coming across as far more decisive than Churchill who appeared as a dangerous irritant and a very loose cannon.

By contrast, his wife Clementine, played by a rather good Miranda Richardson, is portrayed as a strong determined woman, who will not take his nonsense.

There was one scene I struggled to either believe or understand. King George V1, played by James Purefoy was portrayed as visiting Churchill to dissuade him from his plans for them both to sail alongside the men to the Normandy Beaches. Kudos to Churchill for wanting to stand by the brave men of Britain. However, I question did this actually happen? If so, it would have been an act or irresponsible lunacy on both parts.

In summary, I enjoyed the film very much and it certainly gave my husband and me, a lot to think about.

Are you planning to visit the cinema any time soon? Let me know via Twitter or Facebook !