People in the village gossip about Grace’s son, Alfie.

How far can a mother’s love go? Will she ultimately sacrifice her life for his?

Set in Nottinghamshire, this family drama follows the lives of Grace and Alfie as he transforms from a naïve, young boy into a teenager spiralling out of control.

Love, Secrets, and Absolution is a coming of age story with a difference.

Deceit, betrayal, love, and addiction, a family falling apart in the midst of teenage angst and torn loyalties; will anybody find absolution?

‘Love, Secrets, and Absolution’ is published by The Globeflower Agency Ltd under their publishing imprint ‘Globeflower Books‘. 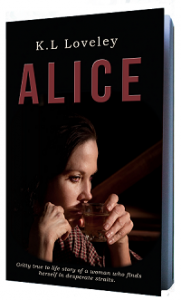 Alice is near breaking point. Floods have left her beautiful dream home a damaged mess, her step children’s lack of respect is giving her migraines and, worst of all, her husband is giving her no support to lean on. Her life is slowly spiralling out of control.

When Alice’s daughter, Anne Marie, repeatedly falls victim to aggressive vandals, Alice finally can take no more. She decides to take control of the mess that has become her life, and finally frees herself from the chaos that has been bringing her down.

Freedom, however, isn’t as sweet as Alice first thought it might be. She finds herself yearning for something she can’t quite put her finger on. In her quest to find it, Alice finds herself turning to drink…

Alice is, at times, a gritty but true to life story of a woman who finds herself in desperate straits.

K.L Lovely’s story tackles alcoholism head-on, and presents the reader with an empathetic account of a spiralling addiction and the resulting pattern of hopelessness that many fall into. We follow Alice, mother of two and step mother to four, from when life’s problems first begin to scratch away at her self-esteem and follow her in her gradual, but steady, decline.

Alice addresses the seriousness of addiction and shows us the importance of love and support for an addict with astounding accuracy.

‘Alice’ is available from:

and Waterstones and other leading book stores!

This website uses cookies to improve your experience while you navigate through the website. Out of these, the cookies that are categorized as necessary are stored on your browser as they are essential for the working of basic functionalities of the website. We also use third-party cookies that help us analyze and understand how you use this website. These cookies will be stored in your browser only with your consent. You also have the option to opt-out of these cookies. But opting out of some of these cookies may affect your browsing experience.
Necessary Always Enabled
Necessary cookies are absolutely essential for the website to function properly. This category only includes cookies that ensures basic functionalities and security features of the website. These cookies do not store any personal information.
Non-necessary
Any cookies that may not be particularly necessary for the website to function and is used specifically to collect user personal data via analytics, ads, other embedded contents are termed as non-necessary cookies. It is mandatory to procure user consent prior to running these cookies on your website.
SAVE & ACCEPT